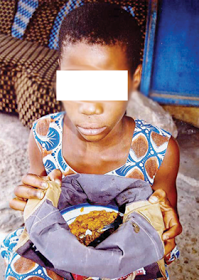 A man narrowly escaped death by poisoning when his 14-year-old maid, who was angry that he scolded her the night before, mixed rat poison with his meal. 63-year-old Nasiru Akinlosotu, a former medicine store operator, had scolded Mary Akinnifesi the night before because she spilled water in the living room. The next day, her madam, while leaving for work, asked her to prepare beans for dinner and serve the husband. The wife, Sikirat, is a primary school teacher who owns a shop where she goes to each day after school. Because of that, she returns home late and Mary mostly handles dinner. That night, Mary, who was still harboring the grudge or the night before, prepared the beans as instructed then when going to serve her master, she added rat poison. As fate will have it, as Akinsolotu lifted the spoon with food in it to eat, he noticed an unusual smell and asked Mary what she put in it. She said it was only spices that were added but as soon as Akinsolotu put the food in his mouth he spat it out. He raised an alarm and neighbors joined him to interrogate the girl and she allegedly confessed to adding rat poison to the food. She had lived with the couple for two years and had never displayed such behavior. Speaking to Vanguard, Akinsolotu narrated the incident and described his survival as an act of God. He said: “I had even put a spoon of the beans in my mouth and about to swallow it when I discovered offensive odour and unpleasant taste from the food. I immediately vomited the beans and called Mary to ask why the beans was smelling in such a manner and the taste was awful but she claimed she added spice”. He said her explanation was not convincing so he raised the alarm and invited neighbours. “It was in the course of interrogation by neighbours that the housemaid confessed that she crushed the medicine meant for rat that was bought few days ago by my wife and poured it into my own share of the food. She later stated that she decided to add the poison into my food in retaliation for the correction which I made when she committed an offense in the house. After the confession, I contacted my wife by phone and narrated the incident to her. Upon her arrival in the house, she decided to report the matter at Yaba Divisional Police Station in Ondo town for further investigation into the matter”. Akinsolotu said he and his family have decided to drop the charges against Mary because she is a relative and they only reported to the police so people can be aware of the activities of some maids. “Since God has delivered me from death, why should I fight again? I have left everything to God”.