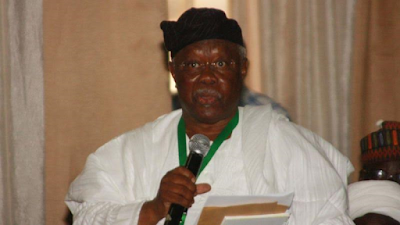 PDP chieftain, Bode George, has condemned calls by some Nigerians, for President Buhari to resign from office because of his ill health. George in an interview with pressmen in Lagos yesterday, described the call as inhumane. According to the former South West chairman of PDP, it is only the president and his managers who could determine if he is incapacitated and therefore should resign. “You see, I don’t support the call by some people that the president should resign because of his health. Even though I have always been on different camps with the president, I do not think it is right for anybody to have evil thoughts towards him. He is ill and we can only wish him good health and pray for him. Calling him to resign because of this is getting beyond politics. He is a human being and only God knows the appointed time for everyone. The holy book says we should always pray for people in authority. I think the president deserves everyone’s prayers, not comments that could even outrage some people and create unnecessary tension” he said.