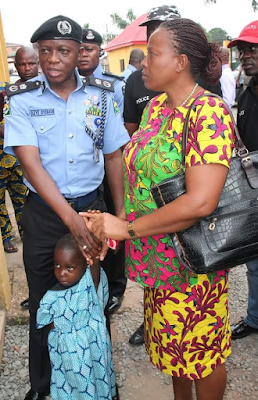 Operatives of Federal Special Anti-Robbery Squad (FSARS) attached to Obehie Division of the Abia State Police Command on May 28th, arrested one Godspower Emeka, 28, of Orji Street Obehie for the stealing his neighbour's 3 year-old daughter, Mercy Emeka. Picture shows the Commissioner of Police handing rescued girl to her mother at the state headquarters and that of the suspects.

The victim who was sold to one Kelvin Ogbunigwu, aged 35yrs, of Omuma Rivers State for one Hundred and Fifty Thousand Naira (N150,000.00) was rescued by the police. The suspects confessed to the crime, while effort is geared towards arresting other members of his gang.

Notorious Kidnapper Arrested In Lagos Mansion, Weeks After N30m Bounty Was Placed On His Head [A MUST READ] Here Are The Top Most Dangerous Drinks Consumed In Lagos, You Won’t Believe No1