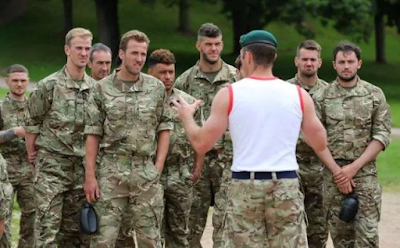 The Three Lions of England team will take on Scotland in Saturday’s World Cup qualifier and were given a never before training session by their manager, Gareth Southgate. About twenty England players were recently taken on a secret mission to a Commando Training Centre in Devon, a 48-hour boot camp designed for marine recruits. The stars pictured in military uniforms spent 48 hours on a team bonding session with the Royal Marines. They undertook water exercise among other drills. Speaking to FA website, England’s coach, Southgate said: ‘We wanted to come and put the guys into a different environment, something they weren’t expecting “The Marines talk about a dislocated expectation, and that was part of the theme of the camp – how will we be adaptable in moments of difficulty for us as a team? “There were some team objectives around pushing themselves beyond where they thought they could go and knowing you don’t want to let any of your team-mates down. “We wanted to expose the guys to an elite environment with one of the elite forces in the world. We wanted them to see that there’s another world out there.” Players who took part in the special drills include: Joe Hart (Man City), Dele Alli (Tottenham), Eric Dier (Tottenham), Adam Lallana (Liverpool), Raheem Sterling (Man City) Jermain Defoe (Sunderland), Harry Kane (Tottenham), Marcus Rashford (Man Utd), Jamie Vardy (Leicester)John Stones (Man City), Kieran Trippier (Tottenham), Kyle Walker (Tottenham) and others, including their coach Gareth Southgate.

Tidaprince - Get Inside Ft. Big ShaQ

See What Blossom Chukwujekwu&#039;s Wife&#039;s New Househelp Did With An Empty Can Of Pringles

2 weeks ago
Song of The Week
Burna Boy – Kilometre
5 days ago
Video of The Week
Mohbad – Marlians Anthem
14 hrs ago
Suscribe
Receive our latest updates, songs and videos to your email. We promise we do not spam.
Top Post Type
Music Video Series Album News