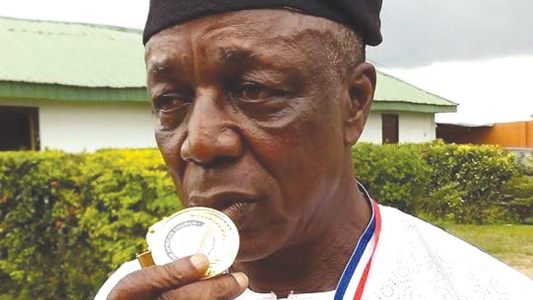 Retired naval officer, Chief Moses Akanni Famuyiwa, popularly called MAF 44, was brutally murdered by unknown assailants in Ogun State in the early hours of yesterday, Wednesday, June 14. The 73-year-old Chief Executive Officer of MAF 44 Gardens and Event centre, Arigbajo, Ogun State was stabbed on the vein in his left elbow by the assailants before fleeing the scene. It was gathered that the room where he was murdered was like a slaughter slab, as the bed-sheets, pillows, rug and the tiles were littered with bloodstains, an indication that he battled with the attackers. There were, however, two sides to the story. While some claimed it was a robbery incident that went haywire, others said it was a case of assassination, as the assailants came with the mindset of killing him, The Guardian reports. The wife, Mrs Opeyemi Akintanmide Famuyiwa, who was with him when the incident happened, narrated to The Guardian that the murderers, numbering three invaded the house around 5:00a.m. when the guards had left their post. They immediately entered the room through the window and went straight for the deceased who was on the bed with her. She disclosed that they pounced on him but he struggled with them for long. They later over-powered him and used a broken bottle nearby to stab him on the elbow vein, where he bled profusely, noting that they took their time to ensure he wasted much blood before they left the scene. "Immediately they left, I tied cloth around the wound to stop the blood, before I shouted for help. They didn’t go with any of his belongings; they only went with my phone and handbag, containing my identity card, driver’s licence, two Automated Teller Machine cards (ATMs) and other valuables. “They didn’t touch his expensive phone lying beside him. God should expose the killers, they must not go free,” she pleaded. One of his sons, Segun Famuyiwa, told The Guardian that immediately his mother raised the alarm, which they heard in the main house, he rushed down to the scene and took him to a private hospital in Ifo, as he was still breathing as at that time, but he was rejected. It was while he was being taking to another hospital that he have up the ghost. Meanwhile, men of the Nigerian Police Force, Ewekoro Command, led by their Divisional Police Officer (DPO) and an official of the Directorate of Security Services (DSS) later recovered the empty stolen bag. The DPO who confirmed that the stolen bag was recovered said the deceased’s wife will be taken to their station for further interrogation, as she cannot immediately give them any information because of the trauma of the incident. “We are going to beef up security around here, more men would be brought in, to patrol this area"