Photo: 2 Nigerian arrested in Ghana for daylight robbery - 4 years ago 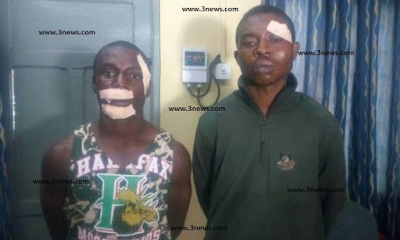 The Cantonment Divisional Police Command in Ghana, have arrested two Nigerian nationals for daylight robbery near the presidential palace in Accra. 3News reports that the two suspects, Ndubueze Odoemenam and Chiokoko Amadie were arrested Wednesday afternoon after they had gone to carry out their operation. The two suspected robbers reportedly deflated the tyres of their victim at the Flagstaff House traffic light and snatched GH¢6,000 he had withdrawn from a bank at Osu. According to the Cantonment Divisional Commander, (ACP) Winfred Frimpong, he said the suspects trailed their victim from a bank in Osu. The police said the victim stopped at the traffic light at Flagstaff House but suddenly realised that he had a flat tyre when the green light came on. When the victim pulled over to the side to check what happened, two guys on a motorbike zoomed past him and snatched the money he had withdrawn together with the envelope. ACP Frimpong said another motorbike rider pursued the robbers and hit the one riding the bike with his helmet leading to an accident at 37 Military Hospital. The accident reportedly caused the money to spread on the road attracting commuters, some of whom began to allot instance justice on them They were, however, saved by ASP Nanka-Bruce, who was returning from a duty point. GH¢5,250 out of the GH¢6,000 belonging to the victim was also retrieved. Preliminary investigations revealed that the robbers attached nails to bathroom sandals ostensibly to deflate the tyres of their victim. The police said after picking their target, the robbers either placed their weapon under his car tyre, usually one of the back ones where he or she had parked. According to the police, the robbers sometimes follow their victims and place the weapon even in traffic. Speaking to newsmen, Accra Regional Police Public Relations Officer ASP Effia Tenge, urged the public to take notice of the new trend of crime and be vigilant. She also deplored the reported attempt of lynching the two robbers at the 37 Military Hospital and called on the public to always report crimes to the police to facilitate the fight against crime waves. The two have been charged with four counts of conspiracy to commit crime, and were arraigned in court Thursday.