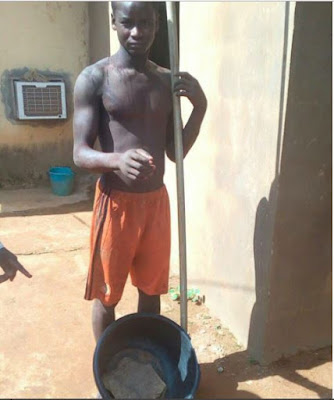 A suspected member of the notorious cult group, Badoo, who was nabbed with a big stone in his hand by an angry mob while he attempted to gain entrance into a house on Felefon street, Ayegbami Community in Igbogbo, Ikorodu, has been handed over to the police . According to reports, the youths in that area apprehended him as they gave him a hot chase after the alarm was raised. The suspect then tried bribing his way out of the mess as he requested that they set him free for N5,000 but when they refused, he increased the offer to N10,000 all to no avail… The Community Development Association (CDA) Chairman, identified as Baba Awe and the Adeboruwa of Igbogbo, HRM Oba Abdulsemiu Orimadegun Kasali, then intervened in order to stop the angry mob from killing him.