WICKEDNESS! This Butcher Rapes Siblings, 4 & 7, And Infects Them With STD [Photo] | Gidicloud

WICKEDNESS! This Butcher Rapes Siblings, 4 & 7, And Infects Them With STD [Photo] - 4 years ago 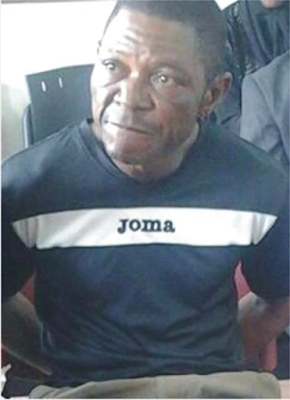 It’s been discovered that the 4 and 7 year-old sisters who were raped by a butcher, who lives in Lagos, were infected with Sexually Transmitted Disease. Parents of the victims said that their daughters’ private parts were decaying and now discharges a liquid substance. Aminu Umar, 42, an abattoir from Kano who lives in Lagos, was arrested following multiple assaults on the underage girls. According to reports, Umar, who lived at 5 Salako street in Oko- Oba in Lagos, in the same compound as his victims’ family, was known to return early from work each day. Upon his return, he would lure the girls into his house with Bobo drinks then have sex with them. The rape continued for so long until the day the mother tried to give her 7-year-old daughter a bath and the girl cried out in pain. It was then she confided in her mother that Umar would always remove their clothes when the parents were not around, put them on his bed and insert his manhood into their vagina. The mother checked the private part of both girls and noticed bruises consistent with forced penetration. P.M. Express reports that the matter was then reported to the Police and Umar was arrested and charged to court. He pleaded not guilty but informed the court that his wife was not living with him. The presiding Magistrate, Mrs Davis Abegunde granted him bail in the sum of N1m with two sureties in like sum. Umar was remanded in prison pending when he will fulfil his bail conditions. The matter was adjourned till 26 June 2017 for hearing. The parents of the victims are afraid their kids may have contracted HIV because the wounds in their vagina have refused to heal despite all the drugs they’ve been taking. Nigerians in diaspora share their amazing transformation after relocating abroad