'I won't run for a Political office' - Michelle Obama | Gidicloud 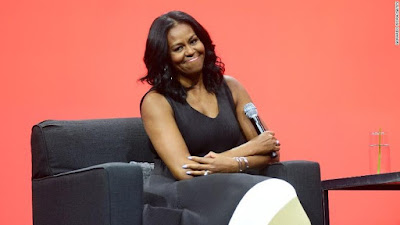 US former first lady, Michelle Obama in her first speech since stepping down from her position has revealed that she has no intention to run for a political office for family reasons. In her speech culled from CNN during the recent America Institute of Architecture convention in Orlando, Michelle who admitted that the White House stay was tough, told the audience that she wouldn’t run for public office saying: 'I wouldn’t ask my children to do this again.' 'It’s all well and good until you start running, and then the knives come out,' she said in her speech. 'I wouldn’t ask my children to do this again because, when you run for higher office, it’s not just you, it’s your whole family.' On what it's been like since leaving the White House, she said: 'It's good to get out of the house. It's been so far so good, it hasn't been that long since we left but it's good to not have the weight of the world upon your shoulders.' 'Friends are surprised I answer the door now', adding that her daughters Sasha and Malia can actually open their windows now, something they could never do at the White House. At the White House, she said her daughters once caused a commotion when they tried to open their bedroom window that faced the public side of the White House because they liked to listen to the protesters. They found it soothing, Michelle added. Describing their final day at the White House as 'bittersweet,' she said it was the longest place she had lived in her entire life and her daughters, Malia and Sasha who grew up at the White House were reduced to tears when President Donald and Melania Trump moved in. 'I didn't want to have tears in my eyes for the new President,' she said. She, however, promised to continue helping young girls to get an education around the world. 'One issue that I am excited about continuing to work on is … to help young girls get an education around the world,' adding that 'The plight of women and girls is real. The struggles are real.'