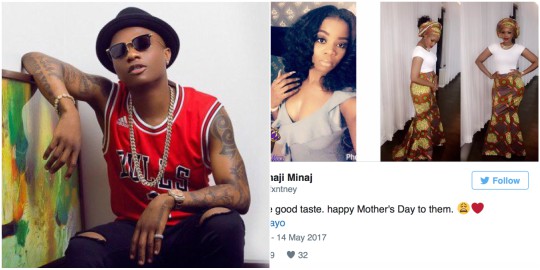 After years of denying that he's the father of Guinean-American model, Binta Diamond son, just like he did for the first, Nigerian superstar Musician Wizkid, has publicly acknowledged his that he has a second son. Yesterday, a fan took to twitter to share a collage of the singer’s baby mamas, Shola Ogududu and Binta Diamond, commending Wizzy for choosing such beautiful women to have children with. “You have good taste, Happy Mother’s day to them” the fan wrote, tagging the 'Come Closer' crooner. And surprisingly, Wizkid responded by tweeting: ‘God bless them for my boys’

Recall that Binta Diamond was slammed by Wizkid fans, ever since she revealed she gave birth to a boy for the star. She was further slammed even after shared a DNA result, proving Wizkid is her son’s father.