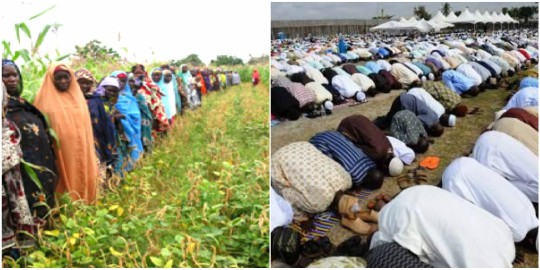 A Facebook user, Gomwalk Rotji, has taken to the social media platform to narrate how a Muslim father tried killing his daughter who got pregnant for a Christian in Pankshin, Plateau State. According to him, the girl’s mixed her food with rat poison, but was advised against eating it by her mother. Here’s what he wrote:- “LIVE IN PANKSHIN…….. Just because a Christian guy impregnate a Muslem girl, It has now turn to a problem. Her father gave her directive to abort it, but out of her love for the guy and his love for her, they decided not to abort it. Her father now mixed up her food with Rat poison to kill her, but her her mother who care for her advice her not to eat the food, that it is been poison. The girl now parked to the guys house as her husband and they welcome her in good faith. Now the situation on ground is, her parents now take them to Civil Defence office but no case since the have agreed to marry each other. They transfer it to Police Station which they said is “harram” for a Muslem to marry a Christian. They said DNA test should be done to prove if is the boys pregnancy. The girl now reply, that she only has two homes ‘the police station and her husband house no any other home again.. The case is now been transfered from Police Station to Gladima house..

My Husband Is A Thief, Wife Alleges, Seeks Divorce