Man accuses his wife of refusing to consummate their marriage and cheating on him with her mum, then she reveals she has no vagina | Gidicloud

Man accuses his wife of refusing to consummate their marriage and cheating on him with her mum, then she reveals she has no vagina - 4 years ago 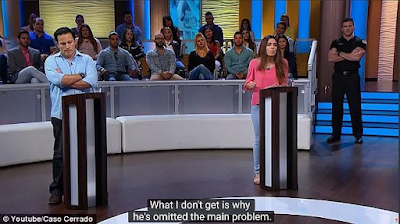 An unusual family drama played out on Caso Cerrado, Spains's version of Judge Rinder, a TV court show that oversees a variety of cases on air. The husband, Alejandro, brought his wife, Tania, before the TV show host, Ana Maria Polo. Alejandro informed the host and others present that he walked in on his wife getting intimate with her adoptive mother and that prior to that, she had always refused to have sex with him. It was at that point that Tania claimed that her husband was trying to divorce her because she has no vagina. Alejandro told the TV host that his wife refused to have sex with him until they got married and even after marriage, she avoided consummating their marriage on their wedding night. He then claimed that he walked in on his wife's adoptive mother penetrating her with a dildo. He said he was done with the marriage and wanted to divorce his wife who he referred to as a "shameless tramp"

With a shaky voice, Tania can be seen fighting back tears as she countered her husband's accusations and discloses that she was born with a congenital abnormality called Rokitansky Syndrome. This means that she has no vaginal canal and no uterus, though she has ovaries. She was diagnosed at age 14. However, after she got engaged and as her wedding approached, she claimed to have gone for a surgery to create a vaginal canal but the first time she had sex with her husband, it was too painful that she cried and freaked out. She said: "He's the love of my life and he knows it. What I don't understand is why he's forgetting to mention the root of the problem. I'm not a regular woman. I've never had a vagina. "I was born with a syndrome called Rokitansky - it's a congenital condition which means the vagina can be very small or completely absent. In my case, it's completely absent. I have suffered greatly because of this. Tania said that when she could not be sexually available to her husband, she felt she had failed as a wife, so she then asked her adoptive mother to help her widen the vaginal cavity using a cylindrical instrument because the doctor had told her that women with the syndrome who have had surgery to create a vagina have to "continually dilate themselves" and have ongoing treatment and therapy. It was in the process of her mother helping her expand the vaginal canal that her husband walked in. The host listened to them both and after they were done, she granted the divorce, leaving Tania horrified..

Burna Boy packs on the PDA with girlfriend Stefflon Don

Church Bans Members That Do Not Have PVC From Worship